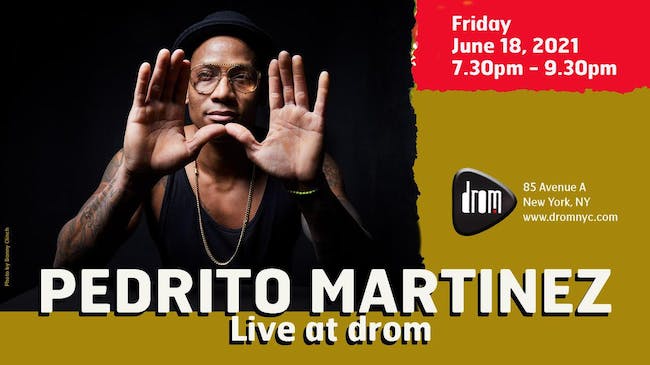 iCal
Google
Pedrito Martinez is back on the stage live at DROM!

“Pedrito is a genius…working with him has been a revelation to me.”

“The Pedrito Martinez Group is the real thing. They had the club JUMPING! It made me feel like a teenager!" Quincy Jones

Pedro Pablo “Pedrito” Martinez was born in Havana, Cuba, Sept 12, 1973 in the Cayo Hueso neighborhood of Old Havana, and began his musical career at the age of 11.Since settling in New York City in the fall of 1998, Pedrito has recorded or performed with Wynton Marsalis, Paul Simon, Paquito D’Rivera, Chucho Valdez, Bruce Springsteen, Eddie Palmieri, Dave Matthews, Jackson Browne, Elton John, James Taylor and Sting, and has contributed to well over 100 albums. A consummate master of Afro-Cuban folkloric music and the batá drum he is also the world’s first-call rumbero—playing, singing, and dancing with dozens of Cuban rumba groups and contributing to, or appearing in, several important films, including Calle 54 (2000) and Chico and Rita (2010).

Pedrito was a founding member of the highly successful, Afro-Cuban/Afro-Beat band, Yerba Buena, with which he recorded two albums and toured the world in the mid- to late-90’s.

Mr. Martinez’s career as a leader began in 2005 with the formation in NYC of the The Pedrito Martinez Group. The group’s first, self-titled, studio album, was released October, 2013, was nominated for a Grammy, and was chosen among NPR’s Favorite Albums of 2013 and The Boston Globe Critics Top Ten Albums of 2013.”

Habana Dreams, their second album, recorded largely in Cuba, was released in June 10, 2016. Guests include, Ruben Blades, Isaac Delgado, Wynton Marsalis, Angelique Kidjo.In February of 2019, Pedrito and Cuban pianist, Alfredo Rodriguez, released a duo album called Duologue to critical acclaim and was selected by NPR for a First Listen. Quincy Jones was Executive Producer. In July 2019, Pedrito and Eric Clapton, recorded a newly arranged version of Clapton’s song, My Father’s Eyes for a new Pedrito Martinez album, called Acertijos (Riddles), to be released in early 2021. And on September 22, Pedrito and Clapton performed the song together at Clapton’s, Crossroads Guitar Festival in Dallas, Texas.On March 12, 2020 at the Beacon Theater in NYC, Pedrito had the honor of performing as special guest, with Dave Matthews, Jackson Browne, and The Tedeschi Trucks Band, for a benefit concert called Love Rocks NYC. In June of 2020, Pedrito began releasing singles that were recorded for album, due in early 2021, Acertijos--starting with Yo Si Quiero, an original by Isaac Delgado Jr, Mitchell Delgado, and Pedrito, followed by My Father’s Eyes, a duet with Eric Clapton. 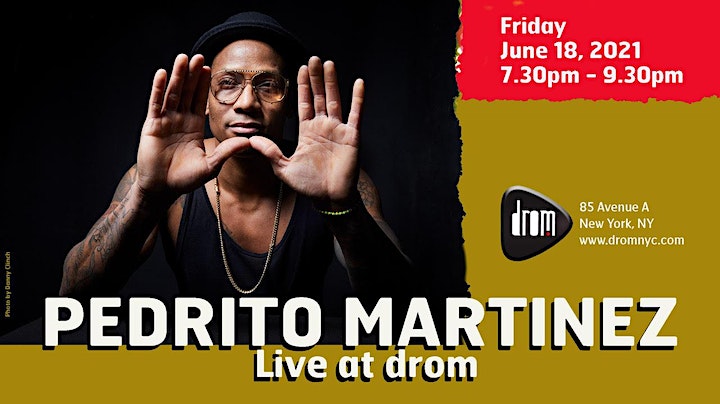