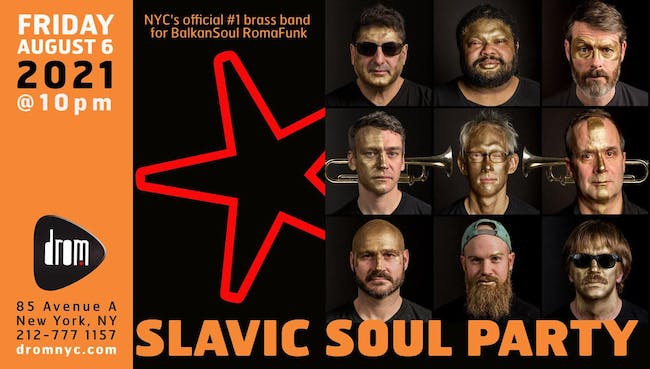 $20 dollars in advance and door

Fiery Balkan brass, throbbing funk grooves, Roma (Gypsy) accordion wizardry, and virtuoso jazz chops make Slavic Soul Party! NYC’s official #1 brass band for BalkanSoul GypsyFunk. SSP! pumps a strong Balkan brass sound through the filter of life in New York’s outer boroughs, making new music out of the unplanned results of immigration, proximity, and globalization. Over the past 15 years the band has released 7 full-length albums, and toured in the US, Canada, Mexico, Europe, Turkey, and Zimbabwe, from pasha’s palaces to dive bars, Carnegie Hall to Serbian schoolyards, festival stages to prison courtyards. The band’s music has fans on both sides of the Atlantic, and their tunes have been covered by Serbian brass stars, New Orleans funk stalwarts, and legendary street bands. SSP!’s Tuesday night residency in Brooklyn has become a destination for music fans from around the world, and is famous for “delivering a great time.” (New York Times)

In September 2016 Ropeadope Records released Slavic Soul Party! Plays Duke Ellington’s Far East Suite. SSP! re-imagines Duke Ellington’s iconic Far East Suite as an Eastern European brass band discovering an exotic American sound, reversing the “exotic tinge” and reveling in this subtle, funky, and brilliant music. Ellington’s suite (created with Billy Strayhorn) was inspired by a 1963 State Department tour that was cut short – they didn’t make it to the “Far East” – and serves as a perfect foil for SSP!’s blend of East European, Romani, and American sounds. Critics call it “a pretty heavenly match” (TimeOut NY) and say “parts of SSP’s reinterpretation sounds like a Bulgarian wedding, others like a gypsy jazz funeral in New Orleans. And yet… it all sounds like Duke Ellington.” (Wall St Journal).

“Of all the NYC dance bands that draw on Eastern European music, Slavic Soul Party! is the coolest…. SSP! jumps from traditional songs to contemporary covers and originals, connecting the dots of a number of folk schools with surprising finesse… Its members seem acutely aware of the common principle that unites the traditions they borrow from: Music ought to move you.”

“Anytime musicians study traditions deeply, and then free themselves to follow their own whims, it’s a beautiful thing. But when it comes to the brass band fusion of Slavic Soul Party! that’s just the beginning. With razor-sharp precision, juggernaut force, and a healthy dose of playfulness, these guys start out in overdrive and never let up… Slavic Soul Party! offers a gutpunch to preconceptions about traditional music, world music, pop music, dance music, but I’ll tell you, this is one gutpunch you’ll enjoy.”

“One of our alltime favorite NYC bands”

“Slavic Soul Party! doesn’t strain for authenticity… it plays its chosen music with skill and spirit.”

“[Slavic Soul Party! is] one of the few that can balance its manic energy and irreverent spirit with a deep understanding of eastern European folk forms and the chops to play them.”

Since its inception SSP! has roused crowds in Serbia, Macedonia, and Turkey, won over Warped Tour skatepunks and BBC commentators, and dazzled everyone from Saban Bajramovic to Sufjan Stevens. The group’s residency at Barbès — a small, seminal nightclub in Brooklyn — has become a gathering for international musicians and the nexus of East Coast gypsy punk, not because SSP! is comprised of scenesters, but because the band is undeniably world class…

On the Far East Suite:

“The melodies… remain the same but the arrangements are so wild and wooly, danceable and grooveable, that it comes out as a whole ‘nother animal, in your face, quixotic to the brain yet challenging enough to the ear where you want to hear it again.”

On first glance this suite might seem like a strange choice of material for superb New York Balkan brass band Slavic Soul Party!, but their recording of it, released today on Ropeadope, honors the tunes and spirit of the Ellington opus while adding their own flavor. 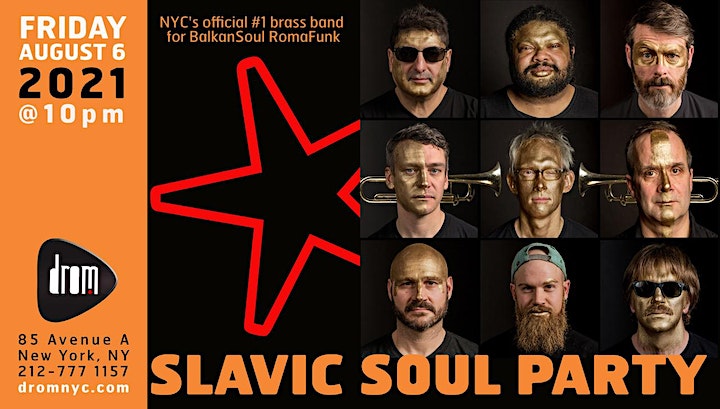