Secret Planet, rather than an industry showcase, prides itself on focusing on music and feels more like a festival than a showcase. Artists come from close and afar. From countries and neighborhoods where English is not always understood, their culture is not always represented on the US stage. Welcome to the 10th Edition!

Over ten years ago, Barbès and Electric Cowbell joined forces for the first time to present a showcase timed to coincide with the APAP conference.

APAP is an annual rite that, every January, brings musicians and music industry professionals to New York City. It is the largest event of its type in the world and brings people from every corner of our planet to the New York winter.

The weeklong gathering can be grueling: showcases, conferences, meetings (cold, snow…)and music can sometimes feel like a footnote, or event a commodity. Secret Planet, rather than an industry showcase, prides itself in focusing on music and feels more like a festival than a showcase. Artists come from close and afar. From countries and neighborhoods where english is not always understood and their culture is not always represented on the US stage. However, whatever their geographical origin, all Secret Planet artists, tend to follow their own vision and not be held back by genre, rules, language, commercial appeal or concerns of authenticity. They all have in common a creative impulse never impeded by stylistic or geographical boundaries.

As most of you did, we had to take a brutal and forced two year hiatus. The world may never be “back to normal” – but as most of you understand that normal was mostly a mirage, we look forward to continuing our mission and starting afresh all at once – and inventing a new ephemeral normal in the process. See you there. 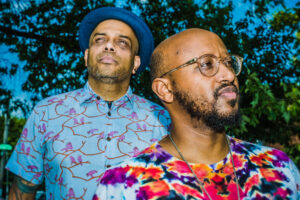 Ravish Momin and Danny Mekonnen seek to create a bold new music that embraces the ancient to the digital- not only drawing on their respective cultural backgrounds, but also including embedded contemporary influences and cutting-edge music tech tools – re-thinking the often flawed concepts of authenticity.

Sunken Cages is the moniker of drummer and electronic music producer Ravish Momin who has worked with a wide array of musicians, from pop-star Shakira to legendary Jazz musician Kalaparusha Maurice McIntyre.Ravish’s music blurs the lines between composition and improvisation – with sounds rooted in Indian and Black Music tradition.
Dragonchild– conceived by Danny Mekonnen, saxophonist, co-founder and longtime leader of Debo Band – is the culmination of decades of musical experimentation, embodied spiritual practice, and critical thinking inspired by the likes of by Swamini Alice Coltrane, Ethiopian filmmaker Haile Gerima, and sculptor and musician Lonnie Holley. 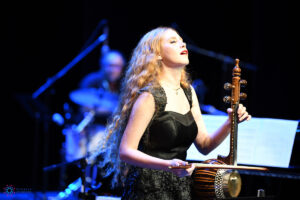 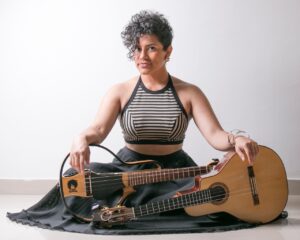 Mafer Bandola is a Venezuelan bandola llanera performer, composer and educator. She is a co-founder and core member of LADAMA, a collective of four women musicians from 4 different countries that has released 2 albums and toured around the world. Since moving to NY, Mafer has been promoting the joropo and llanera traditions, through performing, community building and teaching. Joropos are the main rhythm in Venezuelan Llanera folklore and are at the heart of the rich musical culture of the plains of both Venezuela and Colombia.  Musica Llanera, as it is often called, is not well known outside of the country – it is played on cuatro, maracas, bass, harp and bandola – and draws from hybrid traditions including African, indigenous, criollo and Spanish. The Pipiris band is borne out of Mafer’s Pipiris nights, a bi-monthly event that has become increasingly popular in NY’s Venezuelan’s diaspora – and the community at large – and recreates the free spirited gatherings that are at the heart of los Llanos’ social life. WithPat Swoboda – bass; Neil Ochoa – maracas and Willie Quintana – Venezuelan cuatro. 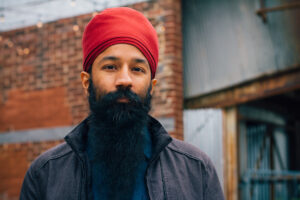 Trumpet player and singer Sonny Singh (of Red Baraat) has launched a solo project inspired by Sikh kirtan with boundary-defying Punjabi anthems. The music is inspired by Chardi Kala, the Sikh concept of revolutionary eternal optimism.

Featured by NPR Music and Rolling Stone India, the project embodies the many spiritual, political, and aesthetic elements that have shaped Sonny: a bolero-mariachi Sikh shabad on one tune, a qawwali song with a reggae bass line on another, a bombastic Ghadar Party tribute in Punjabi and Spanish on yet another.
Featuring: Sonny Singh – vocals, trumpet, and dhol; Mackenzie Shivers – keys, harmonium, vocals; Jonathan Goldberger – guitar; Daro Behroozi – saxophone, harmonium; Yuka Tadano – bass and Rohin Khemani – drums & tabla 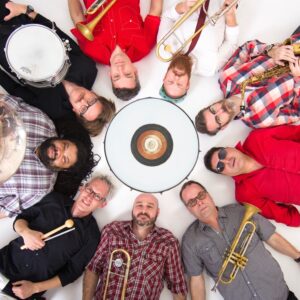 Fiery Balkan brass, throbbing funk grooves, Roma accordion wizardry, and virtuoso jazz chops: Slavic Soul Party! is just what it says. Brash and strong as slivovitz, these nine musicians have forged a virtuosic new brass band music in the heart of New York City; they have held their Tuesday bacchanal at Barbès for for now close to 20 years and – and it has become a destination for locals and brass band fans from around the globe. Stay tuned for a new album to be recorded in early 2023.John Carlson & Kenny Warren (trumpet), Peter Hess (sax/clarinet), Peter Stan (accordion), Tim Vaughn & Adam Dotson (trombone), Ken Bentley (tuba), Matt Moran and Chris Stromquist (go/snare/perc). 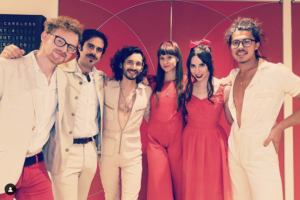 LA BANDA CHUSKA takes inspiration from the twangy surf music of 1960s Peru (Los Belkings, Los Siderals) as well as the more psychedelic flavors of chicha (Los Destellos, Los Shapis). Their post-punk energy has also drawn comparisons to a tropical version of the B-52s. While clearly inspired by vintage Latin psychedelia, the collective is clearly rooted in present day Brooklyn and doesn’t shy away from iconoclastic experiments. With Felipe Wurst and Sam Day Harmet on guitars, Adele Fournet on organ, Erica Mancini on accordion, Abe Pollack on bass, and Joel Mateo on drums. 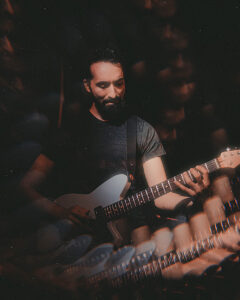 Guitarist Amit Peled plays what could be described as Mediterranean surf, with a surfing style that owes much to the Middle Eastern side of Dick Dale, or the Western side of Omar Khorshid. Habbina Habbina, named after a beloved song by syrian singer Farid El-Atrache, takes its inspiration from Egyptian pop, Greek tunes as well as all sorts of retro-Mediterranean-hits, James Bond Soundtracks, Umm Kulthum, Ari San and many more.

DJ LA LIN
Linda Artola, better known as La Lin, is from Diriamba, a small town in Nicaragua known for its rich folkloric traditions. La Lin started with mix tapes on cassettes, mixing rock, cumbias, salsa, quebraditas, and whatever else would keep the party going. La Lin was also the lead singer of CulturaFolk, a band that experimented with sounds of tropical-alternative rock. When she moved to NY, new worlds of music were added to her repertoire. She collects vinyl and enjoys sharing some of collection’s more .